As I reflect back on my medical journey two years after my first periacetabular osteotomy (PAO), choosing Dr. Earnest Sink at Hospital for Special Surgery as my surgeon was the best decision I have ever made.

Figure skating was my world. I have skated since the age of 5 and I could not imagine a life without it. Unfortunately, in October of 2017, I was diagnosed with a pars fracture on my lower spine and subsequently took 11 weeks off the ice. I slowly returned to the ice, but a few months later, I was forced to abruptly quit figure skating at the age of thirteen after an MRI revealed that, in addition to degenerating discs in my lower spine, I also had a major herniated disc that needed an immediate repair.

In 2018, I entered my freshman year of high school, despondent that I couldn't participate in sports alongside my peers. In January of 2019, my pains worsened again with no identifiable cause. At first, I had sharp intermittent throbbing in my heel, which within a couple of weeks spread to a burning feeling in all of my joints. My hips in particular felt like they were constantly getting “caught,” and I began to fall while walking. Over the next two months, I saw fifteen different doctors, all of whom were unable to give a conclusive diagnosis. In March, my rheumatologist, Dr. Nancy Pan at HSS asked me if anything else in my body was particularly bothering me, and I told her my right hip felt extremely uncomfortable. Dr. Pan immediately ordered a simple x-ray to investigate.

A few days later, my mom received a call from Dr. Pan, and she explained that my x-ray revealed hip dysplasia in my right hip, though they would need more precise imaging to determine how severe it was. She referred me to Dr. Ernest Sink, who immediately ordered an MRI and CT scan. After visiting his office for the first time, he told me that I had severe hip dysplasia in both of my hips. He recommended surgical intervention with a PAO, but these procedures would have to be performed at least six months apart since it was such a major surgery.

Suddenly, all of the abnormal medical adversities I’ve faced throughout my life began to make sense: my back, hip, knee, leg, and ankle problems were caused by my uneven gait, which has been completely misaligned my whole life. It is difficult to identify bilateral hip dysplasia since it affects both sides of your gait. Upon additional geneticist visits, I have since been diagnosed with type III Hypermobile Ehlers-Danlos Syndrome, which has to be managed throughout my life. At times, I still have subluxations in my shoulders or other joints.

In June and December of 2019, I had right then left PAO surgeries. While recovering from the PAOs brought some of the most challenging experiences of my life, I was also able to experience triumphs I never thought were possible. After spending a year and a half with my wonderful physical therapist Michelle Cilenti I was able to progress from having to relearn how to bend and flex my feet to joining my school’s varsity track and field team as a distance runner and returning back to the ice. She was instrumental in my recovery. The aqua therapy and special post-surgery massages along with physical therapy I was able to access at HSS were key to my successful rehabilitation.

On my two-year PAO anniversary, I even recorded a personal record distance-wise and ran 6.05 miles, which was so meaningful since I thought I could never run again after quitting skating. Just last week, I passed my Senior Moves in the Field, officially making me a USFSA Gold medalist in figure skating. Despite being off the ice for such a long time, my elements have surprisingly improved as a result of my hips no longer being dysplastic, and I’m thrilled that I am able to continue skating through the rest of high school and into my college years.

I’ve never felt so comfortable in my own skin, and words cannot even begin to describe how grateful I am to have the privilege of regaining my life back, thanks to my phenomenal team at HSS. My HSS team is not only the best in the world at what they do, but they also showed incredible compassion to me. These surgeries were such a huge life changer, where I even had to take a year off in school. But I am so happy I can start life anew with my new hips. As a firm believer in the saying “everything happens for a reason,” I wouldn’t have wanted to face life head-on any differently. 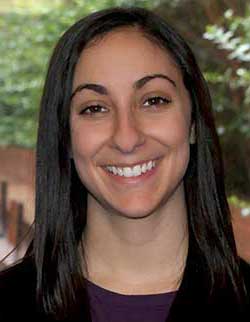