I am an active 63-year-old pilot for a major international airline. My "parallel life" grew from my doctoral studies in psychology and human factors. While I reside in Orlando, Florida, I work principally out of Denver, Colorado and Chicago, Illinois. A ski racing accident in early 1970 left me with a comminuted fracture of the neck of the left femur that was repaired with temporary components that were removed after I healed. I then resumed a very active lifestyle.

Twenty-five years later, aseptic necrosis of the head of the femur required left total hip arthroplasty in January 1995. After healing, I once again became very active. Violent hyperextension of my hip in early 2013 detached the replacement acetabular cup component, which rotated 45º, leaving it no longer superior to the replacement ball component. Revision surgery was necessary. A friend referred me to Dr. Paul M. Pellicci at HSS; however, Dr. Pellicci informed me that he no longer performs complex revisions, and he, in turn, referred me to Dr. Seth A. Jerabek. My revision surgery was performed May 9, 2013. I was the first patient to undergo this procedure utilizing Mako robotics.

Every aspect of my experience was outstanding: Staff, facilities, surgery, and recovery (orthopaedic surgery, anesthesiology, radiology, phlebotomy, medicine, physical therapy, nursing, laboratory, admitting, administrative support, kitchen, services, and more). I was admitted the morning of surgery and discharged two days later. Since I reside far away, I remained in New York City for ten days for follow-up. Less than three months later, I was hiking and climbing mountains in Australia, and working out more than an hour each day in the gym. Fifteen months later, no-one knows that I had surgery unless it comes up in conversation.

My gait, range of motion, flexibility, strength, and endurance show no evidence of a prior injury or repair. My activity level keeps pace with colleagues who are forty years my junior. I recognize the gift that I was afforded through the skill of the surgeons and staff at HSS. I understand the efforts expended at HSS to mitigate the risks of infection and other potential complications. I appreciate the gracious welcome extended to my wife and family. I recognize the respect that everyone at HSS shows to others in all your actions, particularly in maintaining timely schedules that value others' time. Thank you! 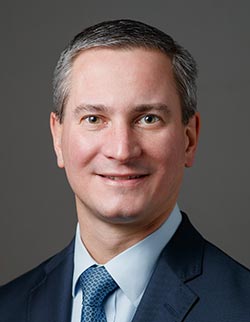